Saipan Is the principal island and commercial center of the Northern Mariana Islands.  It is about 12.5 miles long and 5.5 miles wide and has a total land area of 46.5 square miles which is about the size of San Francisco. Mt. Tapotchau at 1,554 feet is the highest point. Saipan's 54 mile coast line is irregular except on the western side where there is a fringing reef.


A large part of the island is public land.  Saipan has 14 miles of beach. Of the 8 communities on Saipan, Garapan and ChalanKanoa  may be considered the principal urbanized areas. The population in 1995 was 52,698.  Tourism and garment manufacturing are the major economic activities. Saipan is 120 miles north of the United States Territory of Guam. ocation: 15 degrees – 15 minutes north; 145 degrees –
40 minutes east. 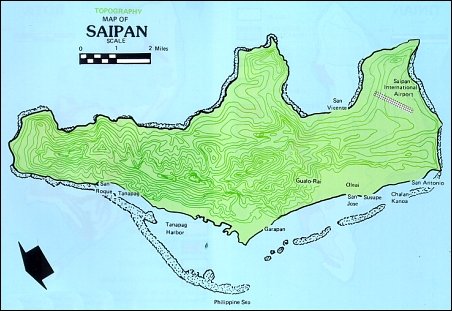