Maug (three islands) Located 281 nautical miles north of Saipan with an area of 0.8 square miles. The three islands are the remains of a partly sub-merged volcano which sorrounds a deep and spacious natural harbor. The islands are bordered by steep cliffs. On the north and west islands there are columns resembling tombstones which crown the ridges, (out crops of basaltic veins). Uninhabited. Highest point 746 ft. (North Island). 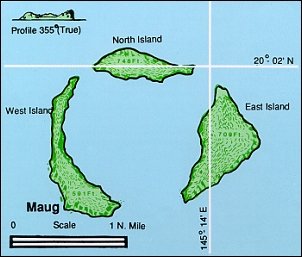