Guguan Situated 130 nautical miles north of Saipan and 1.5 square miles in area. The northwest wall of the active volcano has collapsed and a new cone has built up above the wall of the old one. There are deep ravines between the two peaks. Smoke and large quantities of sulphur sometimes erupt from the volcano. The sulphur has given the mountain the appearance of a snow cap from a distance. The coast is bordered by steep basaltic rock with gables of high ridges with deep, rain eroded gorges. At times a lake forms within the crater. Uninhabited. Highest point 988 ft. 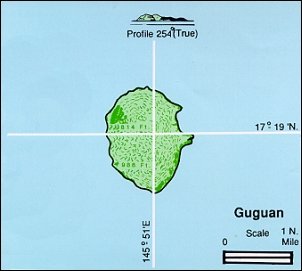