Asuncion An island of approximately 2.8 square miles. Located 259 nautical miles north of Saipan. The volcano rises steeply as an almost perfect cone. White smoke occasionally emerges from the top and slopes. Lava has steamed down the mountain sides giving it a black surface. Shrubs and a few trees can be seen in some places. Landing beach at the southwest end of the island. Uninhabited. Highest point 2,923 ft. 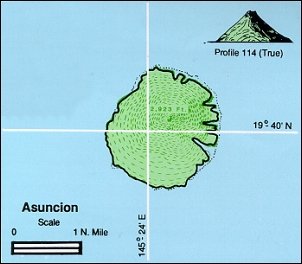