Pagan Located 173 nautical miles north of Saipan with an area of 18.6 square miles. The island has three volcanos one of which is active and separated from the others by a narrow plain. One volcano in the south emits steam and the northern volcano is frequently veiled by a heavy, sulphurous cloud. The slopes of Mt. Pagan are covered by brown ash and at the base of the mountain there are two curious lakes. A series of vertical cliffs cut the island in two. The coast is rocky and unapproachable except on the shores of Eastern Roadstead and Apaan Bay on the west coast. Highest point 1,870 ft. 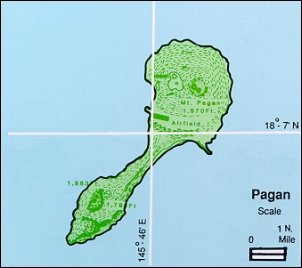